Mead and Bloodshed in the Taverns of Old Vilnius 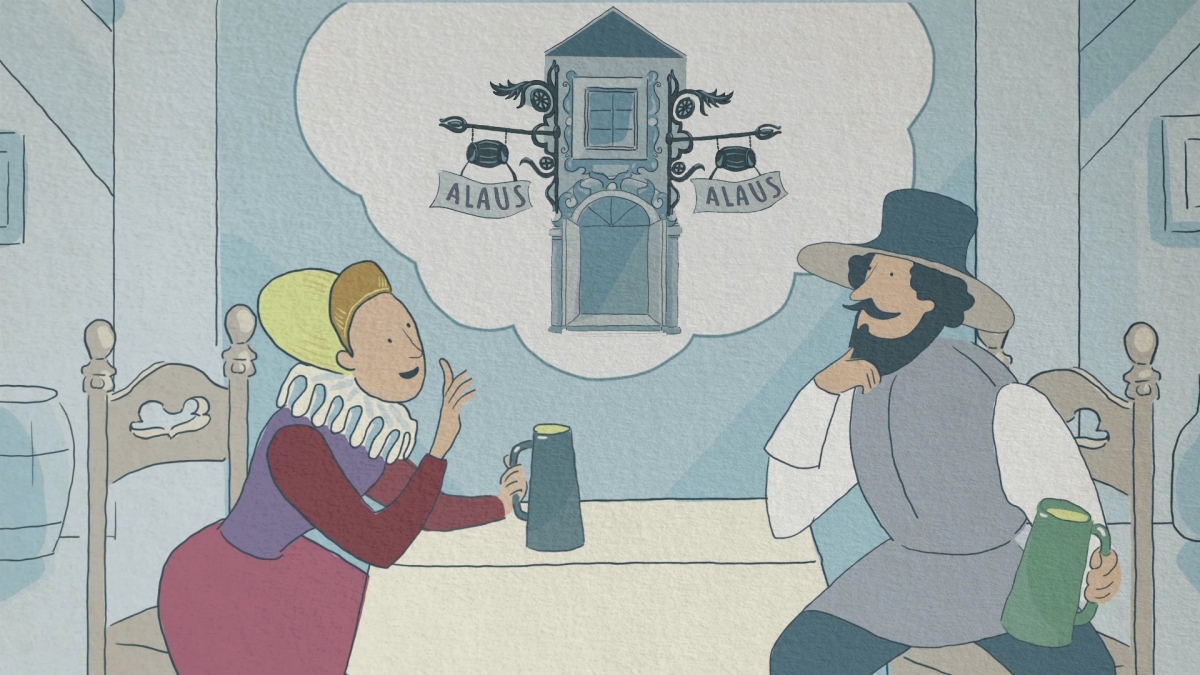 Images showing taverns of old Vilnius are extremely scarce, perhaps for this reason modern authors of historical fiction paint their image in words. Sometimes the barmaid becomes the protagonist and some important decisions are taken in her presence. It is safe to presume that old taverns were lively spots where people guzzled alcohol and punched each other’s faces, surrounded by air thick of expletives, and love for sale. A barmaid always was present in such settings and 16th century documents inform us of several details concerning her life. Most importantly, this occupation allowed women to participate in something nowadays called social life. Many women had no such opportunity and their social circle was limited to her kin and neighbors.

Tavern keeper-shinkorka in the 17th century in the Polish-Lithuanian Commonwealth. A woodcut, about 1655. Lament różnego stanu ludzi nad umarłym kredytem.

Taverns in the city, inns on the outskirts

Four centuries ago, taverns functioned as centres for services and communication nodes. People gathered there to eat and drink, but also to exchange news, and conclude business deals.

A few types of such institutions functioned in and around Vilnius. Inside the city proper, taverns usually served food and drinks, but on the outskirts, the larger inns often offered accommodation too.

Were we to believe Petrus Roisius, a 16th-century lawyer of Spanish descent living in Vilnius, the city’s taverns and inns were nothing to be charmed by. He went as far as recommending travellers always carry some food to be sure they do not go to bed hungry.

16th century reception of a rich guest in a tavern in the Grand Duchy of Lithuania or Poland.

The precise number of taverns in Vilnius is unclear, but archival data makes the figure of around 50 plausible in the mid-16th century, while 17th century Vilnius boasted 55 taverns. This number only includes the legal pubs, i. e. those paying municipal taxes. Illegal watering holes thrived in the city as well.

Opening a tavern required a magistrate permission for the production and sale of alcoholic beverages. Royal privileges also worked, but only very few taverns could boast one. A typical pub was a single-room establishment on the ground floor or sometimes in a cellar. The owners usually lived above it.

In the 16th century taverns in Vilnius rarely carried signboards; they only became popular in the late 18th century. Instead, owners would decorate the entrance door and street side windows to catch the attention of passers-by. Unassuming interiors usually consisted of a green cocklestove, several large wooden tables surrounded by rough wooden benches, and one or more cupboards for jars, cups and other basic vessels.

The owners stored their food and drinks in the cellar accessible only to them. Nevertheless, safety measures were not fool proof. In June 1560 a citizen of Vilnius Trakhim Karob charged his barkeep Jan Naumowicz with forging a key and stealing a variety of goods from his stores.

Mead and beer, the profit-makers

Selling home-made alcoholic beverages earned a tavern most of its profits. Beer was by far the most popular drink, distantly followed by mead and vodka. It is no coincidence that the year 1552 saw the inauguration in Vilnius of the maltsters’ guild.

In stark contrast to many Polish towns, alcohol consumption faced little restriction in the 16th-century Vilnius. Taverns in Toruń, a city in central Poland, for example, served alcohol until the evening bells, i.e. 10 pm, a limitation unheard of in the capital of Lithuania.

In stark contrast to many Polish towns, alcohol consumption faced little restriction in the 16th-century Vilnius. Taverns in Toruń, a city in central Poland, for example, served alcohol until the evening bells, i.e. 10 pm, a limitation unheard of in the capital of Lithuania. This had consequences. In November 1560 few drunken troublemakers broke the windows of one Užupis tavern they were drinking at, chased away its clientele and the owner who lived in the same house, beat his wife, and fled without paying for their drinks.

Despite many violent occasions, the local and state authorities restricted alcohol sales in extraordinary circumstances only. One such directive was introduced in 1553, when Lithuania was suffering an acute shortage of cereals and the royal decree banned distilling vodka from grain, but did not prohibit the right to make alcohol from beer and wine yeast.

A mug from the end of the 16th century – the beginning of the 17th century. National Museum – Palace of the Grand Dukes of Lithuania.

Legal, but not necessarily secure

Illegal taverns and other establishments operated under risk of heavy fines and prosecution, as illegal trade in alcohol created the hotspots violence and other sort of delinquency. The Third Statute of Lithuania (1588) included a clause banning illegal watering holes notorious for all kinds of incidents, from mugging to homicide. This is not to say that legal pubs were much better in that respect.

The Third Statute of Lithuania (1588) included a clause banning illegal watering holes notorious for all kinds of incidents, from mugging to homicide.

Here are a few examples from the quotidian life in Vilnius in 1560-1562 that attest to it. Metalworker Stanisław complained that another smith Jurka beat his servant in a tavern and injured his head above the right eye. The servant died. A teacher Marcin Grajewski made sure that the Vilnan directing slurs at him spent some time behind bars. Once the slanderer sobered up, he agreed that the teacher did the right thing, moreover, he agreed to suffer another punishment if he was to slander anyone in a tavern again.

Unsafe workspace for a woman

Ensuring ample supplies of food and beverages was the main responsibility of any “booze pourer”. Typically, every tavern brewed their drinks themselves, aided by some helping hands.

The job of a waitress therefore was exhausting and dangerous. Known by the nickname meaning “booze pourers” in Polish, they appear in a number of Lithuanian folk songs. One of them tells the story of two drunkards who, swaying at the tavern door, hope that the woman inside will sell them a bottle of booze that will open up their eyes. In the 16th century, the nickname “booze pourer” also applied to wives of tavern owners, the women running pubs on their own, and lessors to a tavern.

Ensuring ample supplies of food and beverages was the main responsibility of any “booze pourer”. Typically, every tavern brewed their drinks themselves, aided by some helping hands.

They also needed to watch after their maids carefully, because some of them were notorious for stealing anything in their reach and it could even lead to violence against their employers. As one example attests, a maid stole a barrel of beer and one of mead and ran away with her consort.

Just like nowadays, pub keepers did their best to draw in customers. Sometimes they resorted to unconventional means, as the 17th-century account reveals.

Michał Kuszelewicz owned a tavern in the city centre but lacked regulars, therefore, upon consulting with his “booze pourer”, paid his servant to get him a piece of corpse hanging in the gallows. Michał thought that since people flocked to watch hangings, they would also frequent his pub once he had a fragment of the executed man hidden inside.

Michał Kuszelewicz owned a tavern in the city centre but lacked regulars, therefore, upon consulting with his “booze pourer”, paid his servant to get him a piece of corpse hanging in the gallows. Michał thought that since people flocked to watch hangings, they would also frequent his pub once he had a fragment of the executed man hidden inside.

The servant cut off several fingers and brought them back to Michał. He drew circles in the air holding the fingers above the largest barrel of beer before stashing them away. The charm did not work, though, and beer drinkers still ignored Michał’s tavern. He eventually got rid of the fingers, saying “Devil may take them, they are of no help.”

Quite possibly, boozers did not like Michal’s beer simply because it contained too much impurities, a widespread problem in many pubs at the time and the cause of innumerable squabbles. Some would grow agitated once asked to pay up. No matter the reason, the irascible customers would direct their anger at the inventory of the tavern and the girls serving drinks.

For instance, in May 1560 two hired hands of Andrzej Mackawicz beat the owner of the tavern, his wife, and broke the windows. In the same month, two tatars chased away the clientele of Anna Slabadowa’s tavern, beat her, and stole her valuable mink fur hat. While in January 1561 a barmaid complained that one patron tried to rape her, but upon failing he beat her and stole a bag of coins.