Francysk Skaryna and the First Printed Books in the GDL 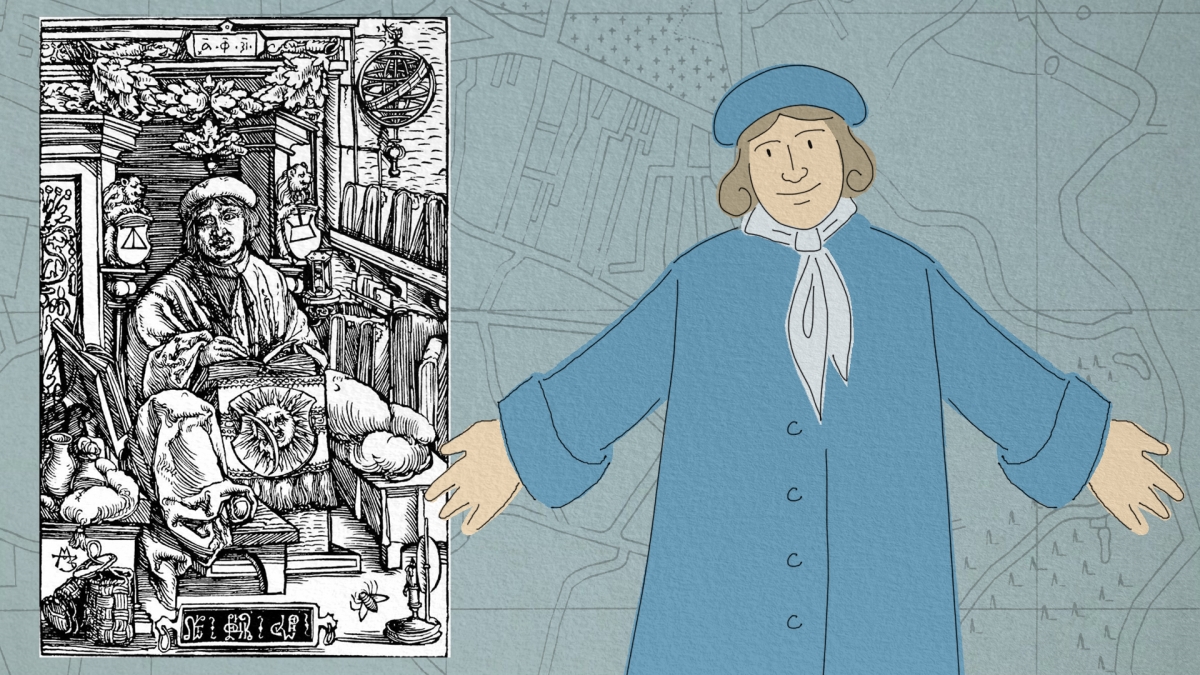 Portrait of Francysk Skaryna. „Russian bible“, the Book of Sirach, 1517.

“The Little Book of Travels” and “The Apostle” were two works of religious literature published by Francysk Skaryna in his Vilnius-based printing house between 1522 and 1525 that became the first books printed in the Grand Duchy of Lithuania. Skaryna became a symbol of the nascent tradition of publishing in Lithuania and lands of the eastern Slavs.

He was one of the brightest individuals of the old Lithuania, a true Renaissance humanist. A man of broad interests and multiple talents, he worked as a medical doctor, secretary, translator, publisher, printer, and gardener. His life, much like the entire legacy of the GDL, belongs to Lithuanian, Belarusian, Ukrainian and, in part, Czech people. One might consider Skaryna a true citizen of Central and Eastern Europe. Born in Polotsk in today’s Belarus, Skaryna became one of the first cultural emigres from the GDL. He, among other things, tended to the royal gardens in Prague, practicing a skill he might have acquired during his time in Italy. As a trained medic he had the knowledge of the healing herbs, which also helped.

A printing house in the times of Skaryna. A 1519 wood engraving depicting Oldřich Velenský‘s workshop.

Many books and articles were written about Skaryna’s life, but his biography retains plenty of obscure episodes. This is why the famous printer is counted amongst the most enigmatic historical personalities of the old Lithuania. On the other hand, his life shows just how much a single human is capable of achieving in the fields of culture and national identity.

The exact dates of his birth and death remain unclear, as he was born before 1490 and died before 1552. His father Luka (or Lukian) Skaryna was a wealthy ruthenian trader based in Polotsk, the Ruthenian region in the eastern part of the GDL. The Skarynas were an exceptional family, because they are known to possess an inherited family name back in the second half of the 15th century, a rare attribute at the time.

Francysk Skaryna received his primary education in the native Polotsk in the school of the local Bernardine monastery. Later on, during 1504-1506 he studied in Kraków and continued his studies in Padua where in 1512 he received a doctorate in artes liberales and medicine.

The first books published in Vilnius

He arrived in Vilnius in 1520 or 1521 and opened a printing house, supposedly, on today’s Stikliai Street. He continued the work he started in Prague, where Skaryna published “The Psalter” and the “Ruthenian Bible” (1517-1519).

The first book he published in Vilnius was the “Little Book of Travels” (1522) typed in the Cyrillic script. It is a collection of psalms and didactic texts meant for travelling merchants and artisans. Quite possibly, Skaryna had brought several ready-made quires from Prague and printed the few remaining sections in Vilnius. His next book, “The Apostle” (1525), however, was printed in Vilnius in its entirety.

Although the building next to the Vilnius Town Hall bears a memorial plaque to Francysk Skaryna (Didžioji Street 19/Stikliai Street 2) and his monument stands in the nearby courtyard (Stikliai street 4), the exact location of his printing house remains uncertain. The preface to “The Apostle” claims that the book was printed “in the house of Jakub Babicz, an honourable man and burgomaster of the great city of Vilnius”. Nevertheless, it remains unclear as to where that house exactly stood.

Babicz was a wealthy man and acted as one of the few patrons in old Vilnius. He supported Skaryna since he was working and publishing in Prague. Without his support Skaryna could not have managed to publish books.

A citizen of Vilnius forced to flee

While living in Vilnius, Skaryna obtained its citizenship. The “Ruthenian Bible” (Prague, 1517) features his portrait, therefore, his is the earliest known image of a resident of Vilnius. Skaryna spent over a decade in Vilnius and married the widow of a former burgomaster, a rich woman who owned a house near the Town Hall and several merchant ships. They had two sons, born in 1526 and 1529.

Skaryna’s life took an unexpected turn in 1532, when two Jews from Warsaw filed a legal complaint demanding that Skaryna paid off his late brother’s debt. Skaryna fled Vilnius but following the order of Sigismund the Old he was captured in Poznań and spent ten weeks in prison. Finally, Skaryna’s nephew agreed to pay the debt and Francysk was freed in May 1532 at the order of King Sigismund the Old that named the printer a “very honourable and wealthy man.”

A few days later Skaryna filed a lawsuit against the Jews demanding a huge compensation due to what he called an unlawful imprisonment. The remuneration eventually came from the king, who issued a special privilege and took the publisher under his personal protection, exempting him of any taxes and legal claims.

By May 1535 Skaryna was in Prague and worked as a royal gardener – a well-paid job offered by Emperor Ferdinand I – for at least the next four years. He died there at the end of 1551 or the beginning of 1552.

His creed remains a mystery

Skaryna’s ethnic identification is fairly obvious: he was a Ruthenian, born in the GDL, a man of clear national identity. Despite that, he called himself a Lithuanian while studying in Kraków and introduced himself as an Italian while living in Prague.

Apparently, he was christened as an Orthodox, but his name, Francysk, speaks of his conversion to Catholicism, the theory supported by the fact that he attended the school of the Bernardine monastery, known for its efforts to convert the Orthodox to Catholicism. Later he was the personal doctor and secretary of Bishop of Vilnius, the job very unlikely to have been given to an Orthodox. On the other hand, in Vilnius he published books for the Orthodox community and they would not have backed him were he a Catholic.

Several historical facts speak in favour of his Lutheran convictions. He left for Königsberg in 1530 to take a position in the court of Albrecht Hohenzollern, the Duke of Prussia, once Sigismund the Old published an anti-Lutheran decree. In addition, his idea to publish the Bible in Ruthenian also looks quite Protestant, given the context of the early 16th century.

The first man of letters of the GDL

The aforementioned portrait of Skaryna featured in the “Ruthenian Bible” is intriguing for it shows not a mere publisher, but a humanist writer, maybe even the translator of the Scripture reminiscent of St. Jerome. It seems that Skaryna did not share the medieval fascination with anonymity and clearly understood the role of men of letters held in the society.

He works in his room, sits in a throne-like chair holding a quill. Alongside him stands a pupitre holding an open book that he transcribes into another one, placed on a side table. He is surrounded by other attributes of his trade – an hourglass, bookshelves, and a candle.

According to a historian Vytautas Ališauskas, the engraving features a man of letters but not yet an author, rather a subject to tradition, whose mission is to transfer the wisdom of the ages via the written word to his contemporaries. It might as well be the first portrait of a writing person in the cultural realm of the Grand Duchy of Lithuania.